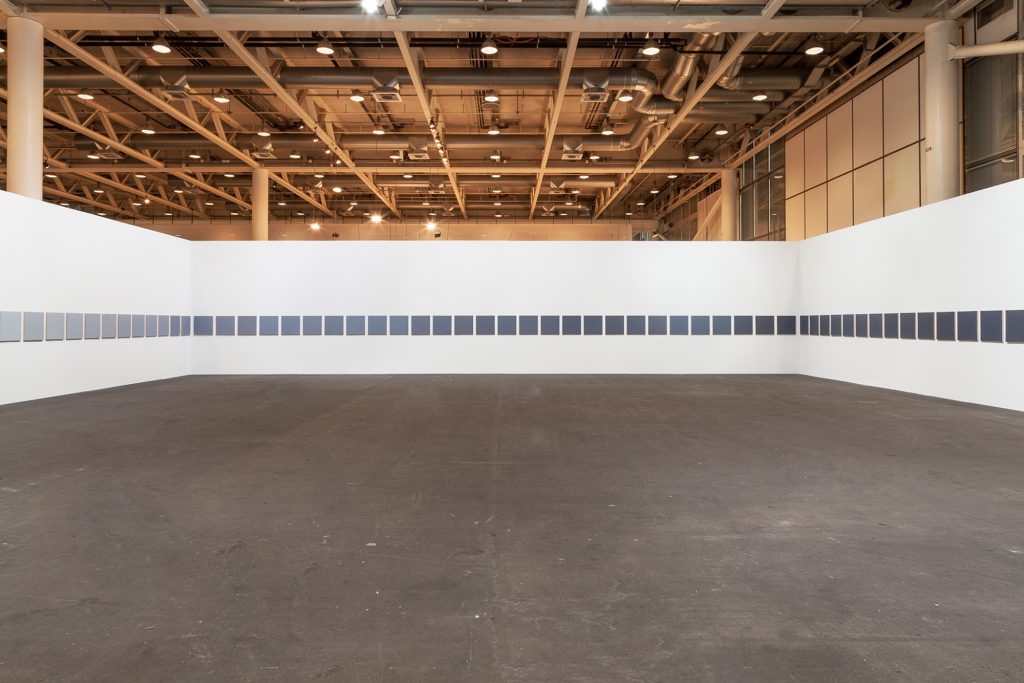 Completed in 1973, and shown only once as-intended during the artist’s lifetime, we are delighted to offer the
unprecedented opportunity to experience one of Hafif’s most essential works, exhibiting for one month only, in
the artist’s home state.

Born in Pomona, California in 1929, Hafif grew up in Laguna Beach and Claremont, California, and attended
Pomona College. Upon graduation in 1951, Hafif moved to Rome, where she would live and work as an artist for
nearly eight years before returning to Southern California to pursue an MFA at the University of California at
Irvine in 1969.

Moving to New York in 1971, the artist could not have arrived at a less auspicious time. In her important 1978
Artforum essay, “Beginning Again,” Hafif describes the circumstances and thought process of that time, which
led her to deconstruct the practice of painting down to its fundamental materials and techniques. Over the
next five decades, until her passing in 2018, Hafif embarked on a systematic exploration of the possibilities of
pigment and process, ultimately yielding 27 comprehensive series of works throughout her lifetime, which she
dubbed, The Inventory.

Pivotal to this development was her iconic An Extended Gray Scale, a single work completed between 1972
and 1973, a recording of every tonal variant she could perceive between white and black on a series of square
cotton canvases (eventually amounting to 106 panels).

Hafif posited an empirical, positivist set of terms before embarking on An Extended Gray Scale:

“After color, black and white, the artist’s gray scale, as many gradations as I could determine by comparison
and sight becoming a set of 106 22” x 22″ oil paintings, white to black. Plans were made, and drawings, for the
many ways in which these paintings could be seen: one long row, two, three, four, or merely a section of the
whole.”

An Extended Gray Scale was presented, partially, at La Jolla Museum of Contemporary Art, La Jolla, California, 1975
and MoMA PS1, New York, 1990. It was presented once, in its totality, during the artist’s lifetime, at Unlimited at Art
Basel, Switzerland, 2015. An abridged installation of the work was exhibited at Kunstmuseum St. Gallen, Switzerland,
2018.

This presentation marks the first posthumous installation of An Extended Gray Scale—exhibited in its totality
and as the artist intended.