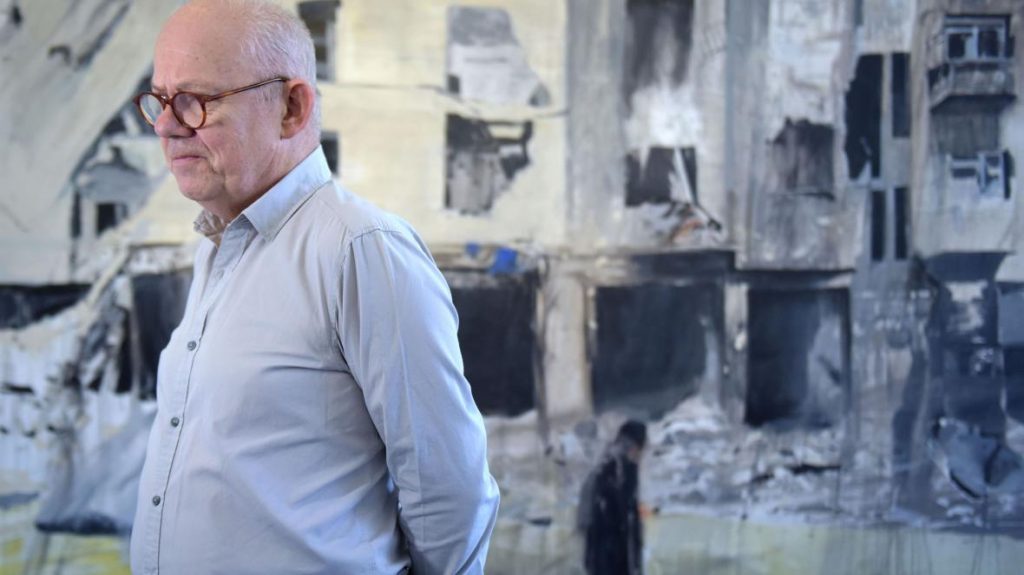 In conjunction with the exhibition Brian Maguire: War Changes Its Address at the United Nations, please join us for a book launch and panel discussion with Dublin-based artist Brian Maguire and Irish author and actor Karl Geary.

Presented on the second floor of the gallery’s New York location, Maguire and Geary will discuss their creative processes, shared histories, and New York experiences as Irish artists often working in the United States, and elsewhere. Following the discussion will be a book signing featuring Maguire’s 2018 monograph, published by Fergus McCaffrey and Kerlin Gallery, and Geary’s 2017 critically acclaimed novel Montpelier Parade.

About Brian Maguire
Brian Maguire (b. 1951, Dublin) is an artist of singular yet expansive vision: an activist, a correspondent, and a voice for dispossessed and marginalized individuals often considered dispensable by the rest of society. Since the onset of his professional career four decades ago, he has been an instigator of numerous interactive projects with prisoners, refugees, and survivors; the artist’s practice is inseparable from his commitment to the community with whom he feels in service. Maguire has been the subject of several recent solo exhibitions including the Irish Museum of Modern Art, Dublin (2018); Royal Hibernian Academy, Dublin (2018); University of Texas at El Paso (2019); and the Art Museum Ciudad Juárez, Mexico (2019). Current and forthcoming exhibitions include the United Nations Delegates Entrance, New York (February 10–21, 2020); Katzen Arts Center at American University, Washington, D.C. (June 13–August 9, 2020); and the Shirley Fiterman Art Center, Borough of Manhattan Community College (winter 2020).

About Karl Geary
Irish-born author and actor Karl Geary (b. 1972, Dublin) moved to New York City at age sixteen. He is the co-founder of two East Village institutions, the music venue Sin-e and the Scratcher. Geary has worked as a script writer (Coney Island Baby) and an actor (Michael Almereyda’s Hamlet and Ken Loach’s Jimmy’s Hall). In 2010, he adapted and directed Dorothy Parker’s You Were Perfectly Fine for the screen. His 2017 novel, Montpelier Parade, was selected as a Book of the Year by The Irish Times and The Times, and has been reviewed by The New Yorker, The Guardian, and Publishers Weekly, among others. Geary’s work focuses on topics of separateness, distinctions, and isolation in society, often investigating how class, age, race, and nationality are used to create barriers within our lives. Geary lives and works in Glasgow.