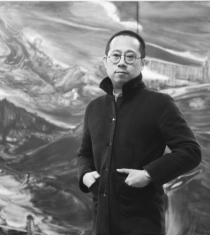 Born in 1978, Rao Fu is a Chinese artist living and working in Dresden, Germany.

From 1999 to 2001, Rao pursued his undergraduate in design at Tsinghua University in Beijing; and from 2002 to 2010, he was enrolled at the Dresden Academy of Fine Arts, to further his studies in painting, graphic arts, and art therapy. During his studies with Siegfried Klotz and Elke Hopfe, he tackled, among other things, the traditional painting methods of the Dresden School. In 2008, he became a ‘Meisterstudiu’ student and continued an advanced program with Professor Ralf Kerbach. During his graduate studies, Rao received the DAAD Scholarship for Fine Arts in 2006 and a grant from the Heinrich-Böll-Foundation from 2008 to 2012. In the following years, he was awarded a scholarship from the Cultural Donation of the Free State of Saxony in 2014 and additionally the ‘Heimspiel-Stipendium’ sponsored by the Cotton Mill Leipzig, from the Cultural Donation of the Free State of Saxony in 2016. He won the scholarship of the 14th hall artist of Leipziger Baumwollspinnerei in 2017.   In 2020, he was honored with the grant ‘Denkzeit’ sponsored by the Cultural Donation of the Free State of Saxony. His works are collected by the National Museum of History and Art of Luxembourg (MNHA), the Saxon Art Foundation in Germany, and the Dresden National Gallery

Rao Fu’s works synthesize various cultures and philosophies of East and West, expanding Saxon Neo-expressionism with Asian aesthetics. He developed his formal language from the legacy of traditional Chinese landscape painting and calligraphy, learned from his grandfather, as well as German traditions like Die Brück and Neo-Expressionism, mastered from his time at the Dresden Academy of Fine Art. His paintings thus employ a range of techniques, combining calligraphic brushwork and Neo-expressive gestural forms, and using unconventional and culturally rich materials such as bitumen and soy sauce to create otherworldly scenes. Their dream-like atmosphere is intensified by a visceral play of bold contrasting colors such as bright orange and dark blue, indebted to art therapy theories and the palette of German expressionism. Perspective is unfixed and multiplied, leaving room for a range of interpretations and approaches to his works. Recently, Rao has devoted more time to large format paintings with several figure groups and even more intense color palettes. His art engages with European and Asian art history while remaining open to contemporary global discourse, urging reflections and debates over cultural hybridity and the modern human condition.