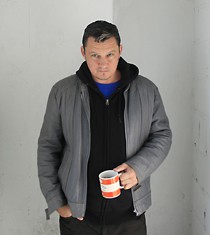 Rough was born in Glasgow in 1972 and holds a BA and an MFA from the Glasgow School of Art. He attended the Hochschule der Kunst, Berlin, in 1996 and later moved to New York City, where he currently lives and works.

Rough’s approach is multifaceted. He has employed a variety of media, including drawing, painting, video, neon, even old T-shirts, but text (in one form or another) is most often his focus. His works have been poetically characterized as addressing “in-between” spaces—and, in fact, Rough operates in an in-between dual identity in his recent Rabo Karabekian series, in which he (re)creates the destroyed works of a once-famous fictional Abstract Expressionist painter, created by Kurt Vonnegut. This conceptual underpinning of these large-scale abstract paintings creates an enormously resonant subtext addressing a host of questions that go to the heart of the nature of the authorship, identity, and creativity itself. 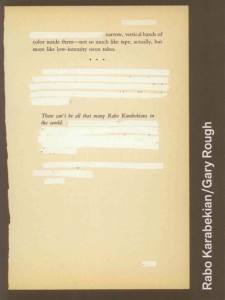