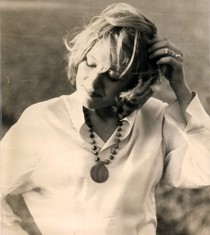 Born and educated in Vienna, Jürgenssen died prematurely at the age of fifty-four. Her artwork received scant attention during her lifetime; however, recent monographs by Gabriele Schor and Abigail Solomon-Godeau have begun to spread awareness of the depth and breadth of Jürgenssen’s artistic achievement. Growing up in the era of über-expressionist Viennese Actionism and coming of age in a conservative, male-dominated Viennese art world, Jürgenssen developed an extraordinarily rich private studio practice that encompassed drawing, performance, photography, and sculpture.

Jürgenssen’s drawings from the late 1960s reach into psychedelic pop culture, with fluffy, Lorax-like trees and Yellow Submarine–style cartoon characters rendered in exquisite detail and color. In the early 1970s, she developed a surrealist trajectory that provoked further dreamlike vistas. Issues of gender are apparent in Jürgenssen’s photographic works, sculptures, and drawings from every period. One such example includes her 1976 shoe work, Untitled (wedding shoe). The scuffed white shoe, adorned in symbolic matrimonial attire of a veil and artificial flowers, is displayed within a glass vitrine on top of a bed of sand, potentially implying seduction and sadism, presentation and confinement.

Her self-portraits often represent hybrid human forms, showing the female body adapted and armored, debunking gender codes and roles such as in Nest (1979/2002), which features a nest filled with two small eggs sitting between Jürgenssen’s crossed and sheer-stockinged legs. Meanwhile her Stoffarbeiten (fabric works) also allude to this hybridization. Consisting of photographic prints mounted on canvas and attached to iron frames, these works juxtapose imagery of human figures and other forms. Examples include Houdini (1990) and Vertigo II (1994).

Jürgenssen studied at the University of Applied Arts, Vienna, in 1968–71. A solo exhibition of her drawings took place at Graphische Sammlung, Albertina, Vienna, in 1978. Between 1980 and 1997, she lectured in Vienna at the University of Applied Arts and then the Academy of Fine Arts. Understanding of Jürgenssen’s work has been nurtured by Galerie Hubert Winter, Vienna, since 1981. The artist’s 2018–2020 traveling retrospective Birgit Jürgenssen. I Am. has exhibited at the Weserburg Museum of Art, Bremen Germany (2020); LOUISIANA Museum of Modern Art, Humlebæk, Denmark (2019); GAMeC, Bergamo Italy (2019); and the Kunsthalle Tübingen, Germany (2018).