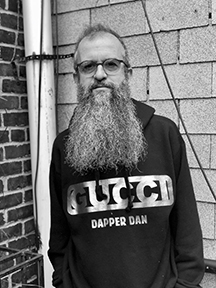 Ari Marcopoulos, who was born in Amsterdam in 1957 and moved to New York City in 1980, is an artist, filmmaker, and photographer currently living and working in New York. He has been the subject of several solo exhibitions, at Fotografiemuseum Amsterdam, the Netherlands; Berkeley Art Museum in California; MoMA PS1, New York; galerie frank elbaz, Paris; Marlborough Chelsea, New York; and Alleged Gallery, New York, among other locations.

Marcopoulos participated in two Whitney Biennials (in 2002 and 2010), and his photographs are in collections including the Whitney Museum of American Art, New York; San Francisco Museum of Modern Art; New Orleans Museum of Art; and Detroit Institute of Arts. His work has been published in the New York Times Magazine, Interview, Paper, Blind Spot, Transworld Snowboarding, and Snowboarder. His films include the documentary